The 500,000+ acres of the Pisgah National Forest surrounding Asheville feature some of the most beautiful and rugged mountain scenery, and the best recreational opportunities in eastern North America. The Pisgah National Forest covers much of the north and central western mountains of North Carolina - with whitewater rivers, waterfalls, and hundreds of miles of trails. It was established on October 7, 1916, with the first tract of land purchased under the Weeks Act, which led to the creation of the national forests in the eastern United States. It is also home to the first school of forestry in the United States, now preserved at the Cradle of Forestry in America Historic Site, and boasts two of the first designated wilderness areas in the east. All of this land was originally part of the Biltmore Estate!

Pisgah is broken up into three Ranger Districts - here are 50 things to do: 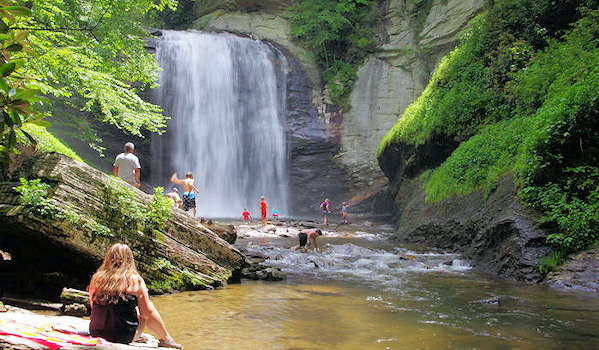 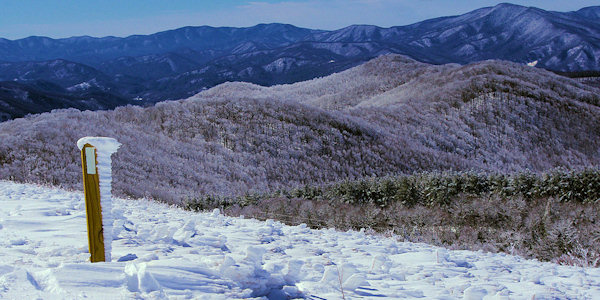 The Appalachian Ranger District covers a large area along the North Carolina/Tennessee border, northeast of the Great Smoky Mountains National Park. Among the highlights of this region are the Harmon Den mecca for horseback riders, Max Patch mountain (pic) offering stunning panoramic views, the French Broad River, Lover's Leap and the Appalachian Trail. This area contains some of the most beautiful mountain scenery in the east including important wildflower habitats at Craggy Gardens and Roan Mountain. Also included in this district are Mt. Mitchell and Grandfather Mountain. Waterfalls include Douglas Falls and Walker Falls.
Appalachian Ranger District
632 Manor Road, Mars Hill, NC 28754
(828) 689-9694 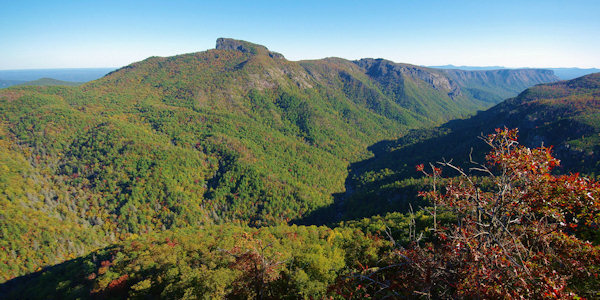 The Grandfather Ranger District lies southeast of the Blue Ridge Parkway, from north of Asheville to Blowing Rock. Linville Gorge (pic) is the predominant feature of the area, with its very rugged terrain to challenge even experienced hikers. There are also easier trails in this area. Other significant features include the Wilson Creek area, which is highly favored among kayakers, and the Brown Mountain Off-Road Vehicle area. The Point Lookout Trail opened in 2008 for bikers. Nearby is Catawba Falls. Great trails near Linville Falls include Beacon Heights, Rough Ridge and Chestoa View. Also see Roaring Fork Falls, Setrock Creek Falls, Tom's Creek Falls and Upper Creek Falls.
Grandfather Ranger District
109 Lawing Drive, Nebo, NC 28761
(828) 652-2144

Southern Appalachian Anglers
Take a full-service, guided fly fishing or bass fishing trip near Asheville. You can enjoy the Appalachian Mountains by boating and/or wading in North Carolina's stream-fed lakes and rivers. Professional fishing guides ensure exciting fishing on the best pristine rivers in WNC.
Go to their website. Save to Trip

Pisgah Forest Pride Day
Join the fun and help with work projects in Pisgah National Forest in the Looking Glass area - including trail maintenance, repairs, plantings and more (sign up in advance), coordinated by The Pisgah Conservancy.
Go to their website. Save to Trip

Pisgah Field School Hikes & Tours
Explore the natural and cultural wonders of Pisgah National Forest through guided hikes and small tours for waterfalls & wine, stargazing, sunsets and more in the Brevard area, presented by the nonprofit Cradle of Forestry in America Interpretive Association. Custom private tours also.
Go to their website. Save to Trip
Want to list your business on this page?Contact us

Camping
The Pisgah National Forest offers full-featured campgrounds like Lake Powhatan as well as primitive and group campgrounds. See our Camping Guide and our Bear Safety Tips. If you are backpacking, check with the ranger office in the area you want to explore since regulations vary by region. If you're new to camping or want to hit the "easy" button for an outdoor experience, check out our Glamping Guide.

Dogs
Dogs are allowed on a leash on all trails. Also see Pet-Friendly Asheville.

Safety
See our Waterfall & Hiking Safety Tips before you hit the trail.

History
The beginnings of the Pisgah National Forest occurred when George Vanderbilt assembled property around his growing Biltmore Estate that grew to 125,000 acres. Much of his "Pisgah Forest" was managed for the production of timber, water and other natural resources. This 86,000-acre area was sold after Vanderbilt's death in 1914 to the U.S. Government and became one of the first tracts of the Pisgah National Forest. The selling price of $433,500 was well below its value ($5/acre). 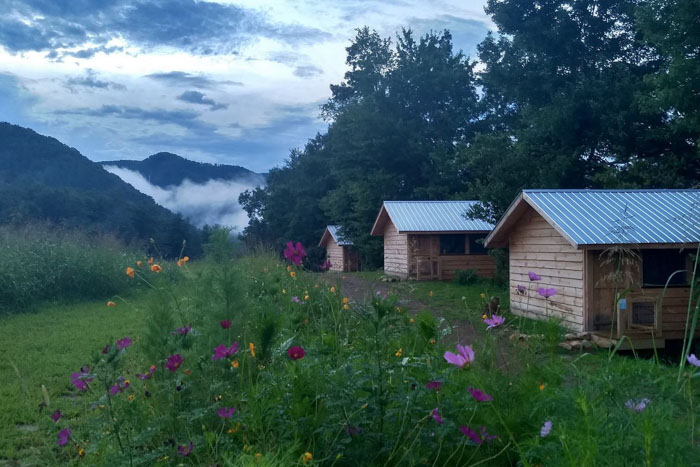 Glamping Near Asheville
What is glamping? It’s a combination of glamour and camping, or luxury camping, satisfying both the city slicker and nature lover. Arrive to a fully set up mountain campsite in our Blue Ridge... read more 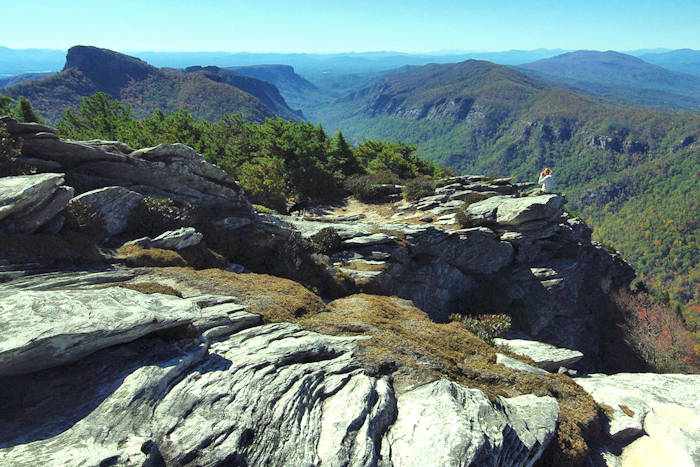 Linville Gorge
Linville Gorge is one of Eastern America's most scenic and rugged gorges, created by the scouring action of the Linville River. Sometimes it is referred to as the "Grand Canyon of Eastern USA." The... read more 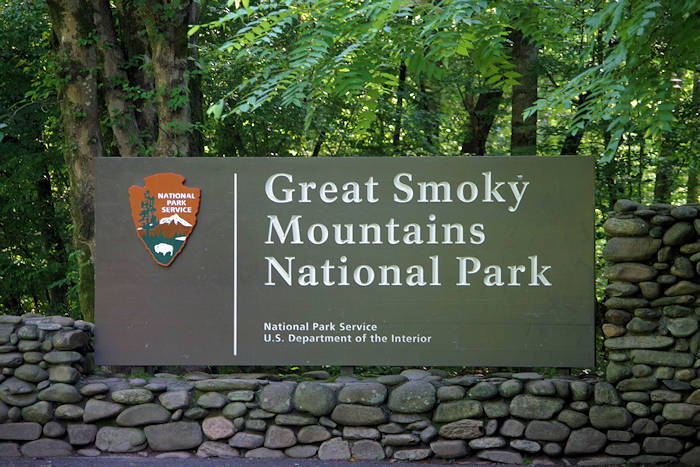 National Parks Near Asheville
Get outdoors and explore! We are so lucky to have four amazing places near Asheville that are part of the National Park Service. Plus, explore two national forests!... read more 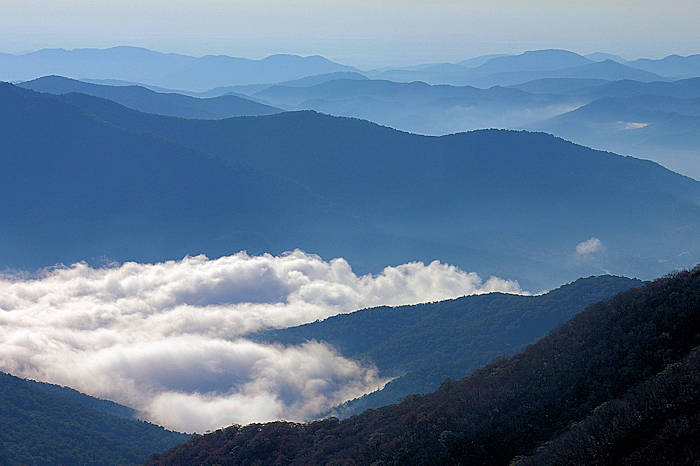