Get outdoors and explore! We are so lucky to have four amazing places near Asheville that are part of the National Park Service. Plus, explore two national forests!

Blue Ridge Parkway is the longest linear park in America and always one of the top visited parks in the NPS. Running 469 miles through the Virginia and North Carolina mountains, it gives all of us assess to high mountain passes, panoramic views and plenty of public land to enjoy with hikes. Work began in September 1935 and it took 52 years to complete with the opening of the Linn Cove Viaduct at Grandfather Mountain. The Parkway is open 24 hours a day unless closed for weather or repairs. It's free to enjoy. Since there are limited signs along the way, see our Top 50 Parkway Stops near Asheville to find many hidden jewels that you could easily miss in the your car.

Great Smoky Mountains National Park began as an idea in the late 1890s. It took the work of thousands to make it a reality in the mid 1920s. Much of the early development of facilities and restoration of early settlers' buildings was done by the Civilian Conservation Corps (CCC), an agency created during the Depression to provide work for unemployed young men. The CCC worked from 1933 to 1942 when World War II shut the program down. Many of the trails, campgrounds, and stone bridges and buildings are examples of their work. The park was formally dedicated by President Franklin Roosevelt in September, 1940. Biological diversity covers its 800 square miles. No other area of equal size in a temperate climate can match the park's amazing diversity of plants and animals, with 17,000 species documented, and scientists believe an additional 30,000-80,000 species may live there. Park admission is free. See our Top 20 Things to Do in the Great Smoky Mountains on the North Carolina side.

Carl Sandburg National Historic Site in Flat Rock is the home of the famous writer, folk singer, social activist and Pulitzer Prize-winning poet and biographer Carl Sandburg. When he died on June 22, 1967, his wife Lilian determined that his legacy and home should be preserved forever. The park was authorized on October 17, 1968 and opened in 1974. The park's vast historical and cultural resources include 264 acres of pastures, ponds, and hiking trails, as well as a total of fifty structures, including the Sandburg's residence and goat barn. The important museum and archival collection is housed in the Museum Preservation center.

The Appalachian National Scenic Trail (AT) is a 2,174-mile hiking trail from Maine to Georgia. While many hike the entire trail each year, there are many places for single or multi-day hikes near Asheville. The Appalachian Trail was finished in 1937 after more than a decade of work. Today, it is maintained by 31 trail clubs and multiple partnerships, and managed by the National Park Service, United States Forest Service, and the nonprofit Appalachian Trail Conservancy. See our Top 5 Day Hikes on the AT.

Pisgah National Forest surrounds much of Asheville with 500,000 acres of some of the most beautiful and rugged mountain scenery, and the best outdoor exploration in eastern North America, including whitewater rivers, waterfalls and hundreds of miles of trails. See our Favorite 50 Places in Pisgah Forest.

Nantahala National Forest, the largest national forest in North Carolina, covers 531,286 acres in the western tip of the state. Read all about it.

How Did NPS Begin?
On August 25, 1916, President Woodrow Wilson signed a bill that mandated the agency "to conserve the scenery and the natural and historic objects and wildlife therein, and to provide for the enjoyment of the same in such manner and by such means as will leave them unimpaired for the enjoyment of future generations." 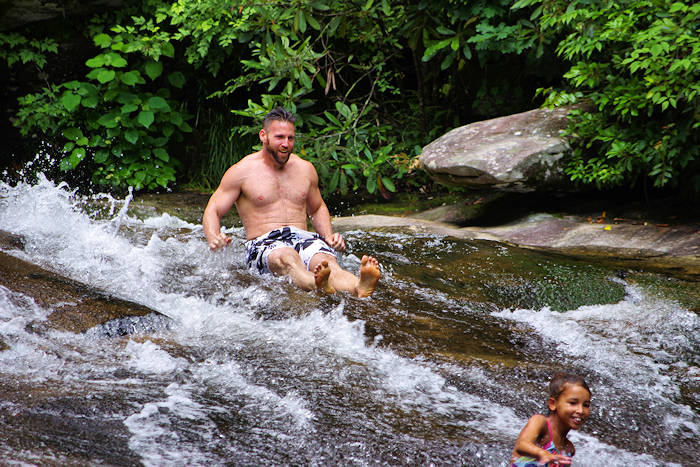