Top Yoga Studios in and around Asheville
Skip to main content

Top Yoga Experiences in and around Asheville

As a mecca for health and well-being, it’s no wonder that Asheville has a thriving yoga culture. With the highest concentration of experienced, certified, world-class yoga teachers in the region, Asheville has some of the best yoga studios in the Southeast. No matter which part of town you visit, you’ll find a yoga studio. Each studio has its own style and atmosphere from peaceful and welcoming studios that feature restorative yoga classes to power flow yoga studios to alignment-based yoga studios and everything in between. Most yoga studios in Asheville offer beginner-friendly and all-levels yoga classes. Feature photo: Stephan Pruitt/Agape Yoga

What is Yoga?
Originating in India, yoga is an ancient tradition and science that has been passed down for thousands of years. Most of the yoga we practice today in the Western world is based on Hatha yoga, which is about bringing balance to the body, mind, breath, and spirit. A method of self-discovery and transformation, the word yoga originates from Sanskrit and means ‘to yoke or bind,’ and is often interpreted as ‘union’ or a method of discipline. There are endless benefits from practicing yoga, including a calmer nervous system, a healthier circulatory system, a stronger respiratory system, smoother digestion, better sleep, improved focus, and clarity of mind. 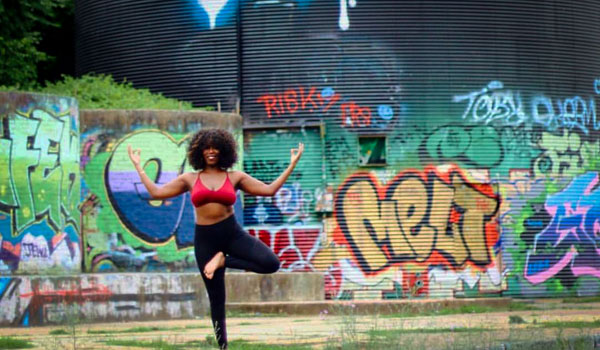 Types of Yoga in Asheville and WNC

There are many styles of yoga, including Kundalini yoga, Iyengar yoga, power flow yoga, hot yoga, vinyasa, and restorative yoga. Most yoga studios in Asheville and Western NC offer multiple types of yoga. Some yoga studios are specific to a certain style and some yoga studios feature a variety of styles.

Whether you’re seeking a moment of bliss or to strengthen your physical body, new to yoga, or have a steady yoga practice, the Asheville yoga scene has something for you. 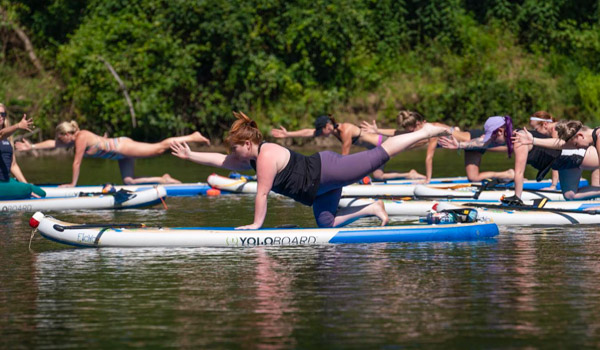 Unique Yoga Experiences in and around Asheville

In Western North Carolina, there are various creative ways you can practice yoga and say ‘Namaste.’ Yoga is offered in a variety of settings such as public parks, breweries, farms, nature trails, mountain balds, waterfalls, and more. 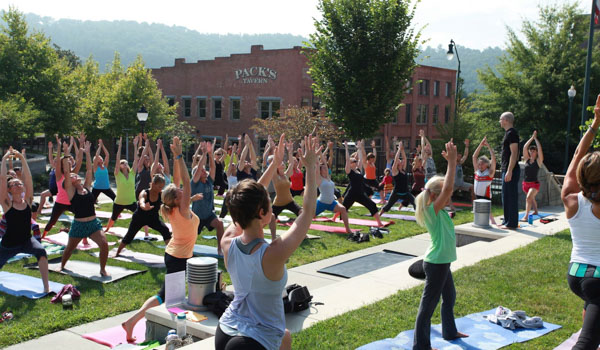 Yoga & Animals
In WNC there are tons of opportunities to practice yoga with furry animal friends, including goats, cats, chickens, and more! Sanctuary Brewing in Hendersonville, Franny’s Farm in Leicester, and Violet Owl Wellness in downtown Asheville typically offer yoga and animal classes. 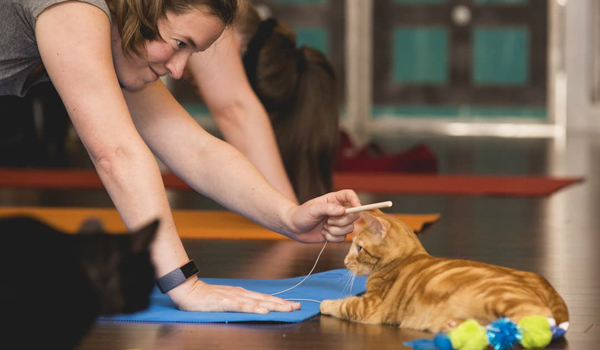 Asheville Wellness Tours
Add rejuvenation and relaxation to your next Asheville adventure! Choose from a mix of lighthearted experiences including Yoga Hiking, Forest Bathing, Tarot Readings, Massage, Goat Yoga, and more. Ideal for girls' getaways, corporate retreats, and wedding day wellness to help you connect more deeply to yourself, each other, and Asheville.
Go to their website. Save to Trip

West Asheville Yoga
Known as the sweetest little yoga studio in Asheville, this studio honors all paths of yoga and features multiple classes throughout the week, including Yoga Basics, Morning Vinyasa Flow, Yoga for Resiliency, Prenatal Yoga, Kundalini Yoga with a meditation and gong bath, and more. This small neighborhood studio is the original donation-based yoga studio.
Go to their website. Save to Trip

Inspired Change Yoga
Inspired Change Yoga is a safe supportive community for all to practice, explore, and connect with self and others. Their goal is to make yoga accessible to everyone; and they offer classes for kids, teens, beginners, and advanced practitioners. Cost: They offer a visitor’s pass for $29, which includes unlimited yoga for seven days.
Go to their website. Save to Trip

Asheville Yoga Center
The region’s largest and oldest yoga center, this studio offers over 100 classes a week, with four yoga studio rooms plus a boutique offering high-quality apparel. With a solar-powered campus and a variety of other green features, Asheville Yoga Center is committed to sustainability. Mats and props provided in each class.
Go to their website. Save to Trip

Black Mountain Yoga
Black Mountain Yoga features classes for all ages and abilities. They offer a range of class styles, including flow and yin with gong sound healing, gentle and restorative, sunrise yoga, kids yoga, and private yoga therapy sessions. They also have a private sauna. Fun fact: The studio is 100% wind-powered.
Go to their website. Save to Trip

Hot Yoga Asheville
This premier hot yoga studio in Asheville offers multiple types of hot yoga classes at 100-105 degrees, including Hot 26, a Bikram-inspired class. They also offer Inferno Core, a hybrid pilates and yoga class, which provides a full-body workout. Only in town for the week? Buy the visitor’s pass for $50 for a week’s worth of classes. This pass includes a yoga mat and towel rental.
Go to their website. Save to Trip
Want to list your business on this page?Contact us
Tier 2

Love Shine Play Yoga Festival
Formally the Yoga Festival, this event features 40 presenters and 90+ offerings downtown, including yoga, music, outdoor activities, and health & wellness experts (fees). Mountain Air Market at Pack Square Park on Friday-Sunday is free with slackline park, music, art, body care, and organic food.
Go to their website. Save to Trip
My Trip Planner
Also See
Get Our Free Email Updates
Get our digest of travel news, new activities and attractions, travel giveaways, and seasonal events in Asheville and the North Carolina Mountains.
Check this out! 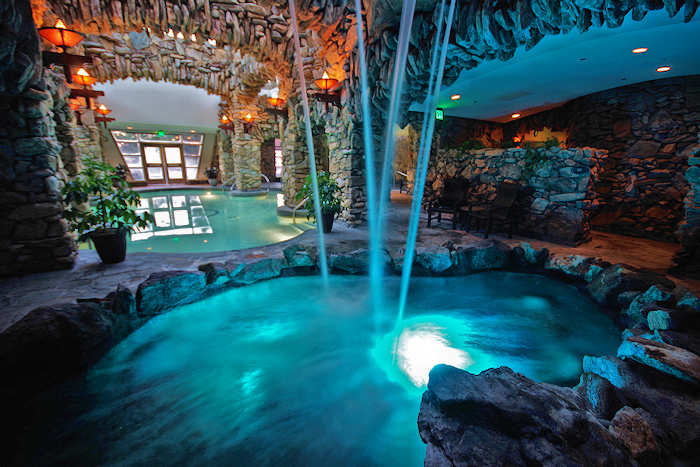 Top Spas in Asheville and Western NC
Be it a weekend of relaxation or a special trip to the "Land of the Sky" to care for and pamper yourself, Asheville is a top destination for spas, massage, and holistic wellness. Considered by many... read more 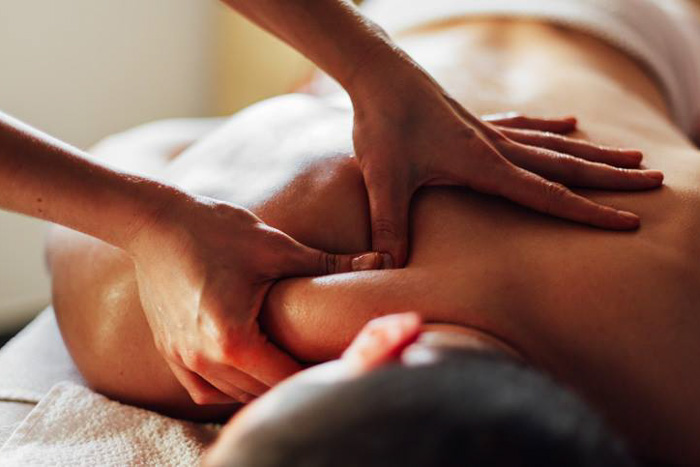 Top Massage and Bodywork in and around Asheville
Ready for the best massage offerings in Asheville and Western NC?A top destination for massage therapy, bodywork, and spa experiences, Asheville is the perfect place to pamper yourself for a wellness... read more 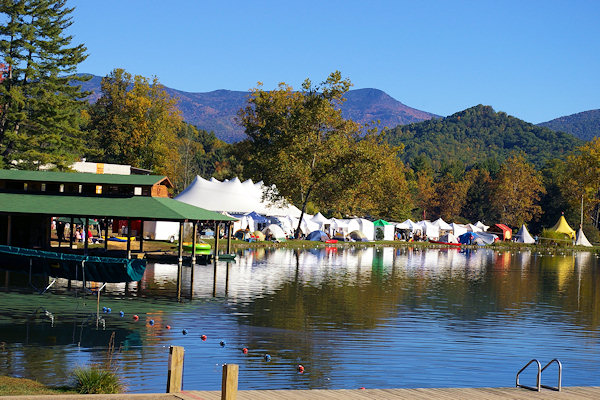