Here are some photos and fun facts about the largest home in the United States. Biltmore House's size and architecture are absolutely amazing. Even after six years of construction by 1,000+ workers, the 250-room castle was not complete when George Vanderbilt opened it in 1895. Work continued for years. Vanderbilt's diverse and cultured tastes influenced his travels with architect Hunt while Biltmore House was being constructed. The two men traveled throughout Europe and the Orient, purchasing paintings, porcelains, bronzes, carpets and furniture. He married Edith in 1898. It was definitely his life's work since he decided to build the estate at age 25 and died too young at age 52. Read more about Biltmore's history and owners.

The biggest and most impressive room in the house is the 70-foot high Banquet Hall (photo at top of page) with the massive triple fireplace and 1916 Skinner pipe organ. The dinner table seats 38 with plenty of space for additional small tables. The Flemish tapestries are from the 1500s. 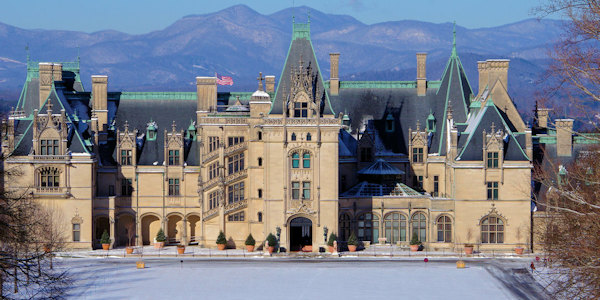 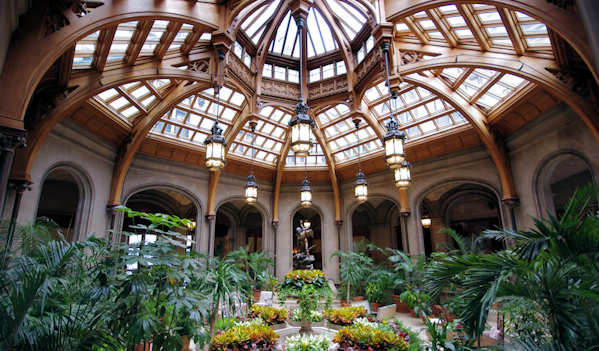 The first room you will see is the Winter Garden. Your self-guided tour covers three floors and the basement. Additional sections of the house can be seen with special guided tours. While there is so much to see, take time to appreciate the amazing art collection. Marvel at magnificent 16th-century tapestries. Almost all of the priceless objects that you see throughout the house are from George and Edith Vanderbilt’s original collection. The largest room in the house is the Banquet Hall with a seven-story high ceiling and triple fireplace. 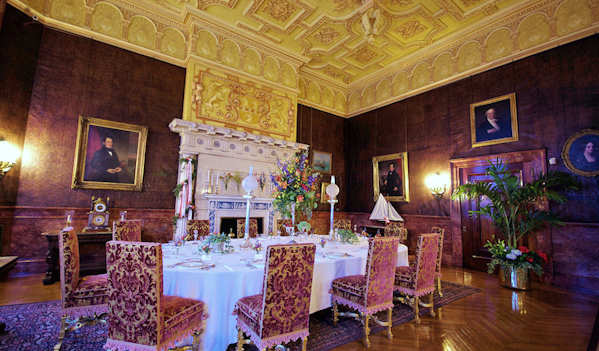 The Breakfast Room is always decorated with seasonal flowers. Get a close look at original art by Pierre-Auguste Renoir and John Singer Sargent.

In 1930, Cornelia and John Cecil opened Biltmore House to the public, hoping to increase local tourism during the Depression. In 1942, during World War II, Biltmore House stored priceless art from the National Gallery of Art in Washington, DC. 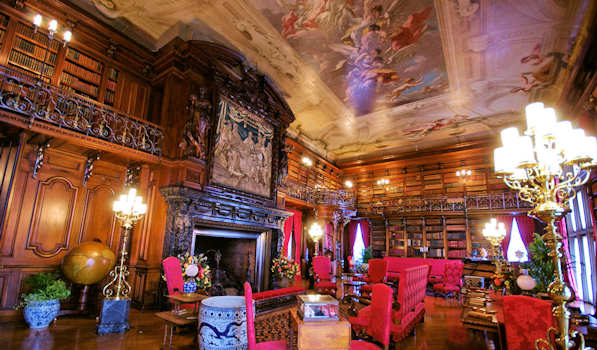 Out of all 250 rooms in Biltmore House, George Vanderbilt’s two-story library is often the guest favorite. Vanderbilt’s book collection consists of approximately 24,000 volumes, with less than half of that in the library. The room was designed about the gorgeous 18th century ceiling painting by Pelligrini. Titled “The Chariot of Aurora,” it was originally located in a palace in Venice, Italy. The painting, 64 feet long by 32 feet wide, consists of 13 separate canvases, the central scene surrounded by 12 smaller paintings. The black marble fireplace and walnut mantle were carved by Austrian artist Karl Bitter. Once termed “one of the best read men in the country” by New York media, George Vanderbilt was a reader from an early age. At age 12, he began keeping a record of the books he had read, including the title and author of each work. The last entry before Vanderbilt’s death in 1914 was No. 3159, the third volume of Henry Adam’s History of the United States. He read an average of 81 books a year. Take a photo tour of Christmas inside Biltmore House. 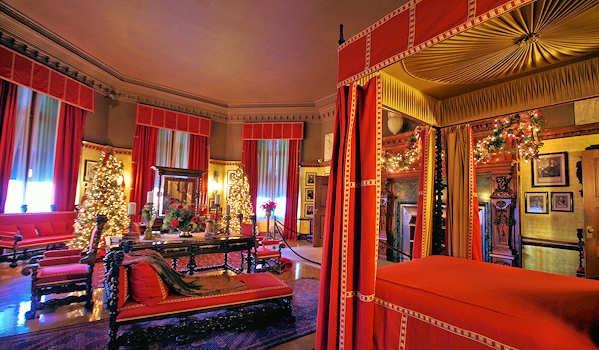 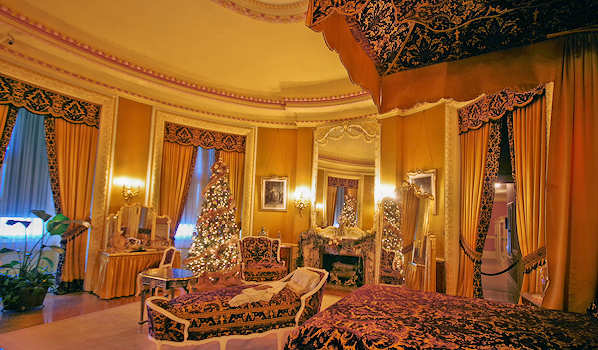 George Vanderbilt engaged two of the most distinguished designers of the 19th century: architect Richard Morris Hunt (1828-1895) and landscape designer Frederick Law Olmsted (1822-1903). The four-story stone house with a 780-foot façade was designed to rival the surrounding mountains in grandeur. Hunt modeled the architecture on the richly ornamented style of the French Renaissance and adapted elements, such as the stair tower and the steeply pitched roof, from three famous early 16th-century châteaux in the Loire Valley: Blois, Chenonceau and Chambord. Its scale continues to be astounding: the house contains more than 11 million bricks; the massive stone spiral staircase rises four floors and has 102 steps. Through its center hangs an iron chandelier suspended from a single point, containing 72 electric light bulbs.

For much more info about things to do on the Estate, go to our Biltmore Guide. And download a printed room-by-room guide of Biltmore House.

Experience Biltmore
Take in the grandeur of our country's largest home, the "Downton Abbey" of America. Explore the many rooms inside the house, walk through breathtaking landscapes and gardens, taste vintages at the winery and enjoy fine dining. See many things to do with our detailed insider's guide!
Read and see more! Save to Trip

Biltmore Winery
Sample wines in the Tasting Room, included in admission to Biltmore Estate. Enjoy specialty tastings and a variety of tours. Shop for all the Biltmore wines and plenty of gift items. Located in Antler Hill Village, it's open late every day.
Read & see more! Save to Trip
Want to list your business on this page?Contact us
My Trip Planner
Also see
Check this out! 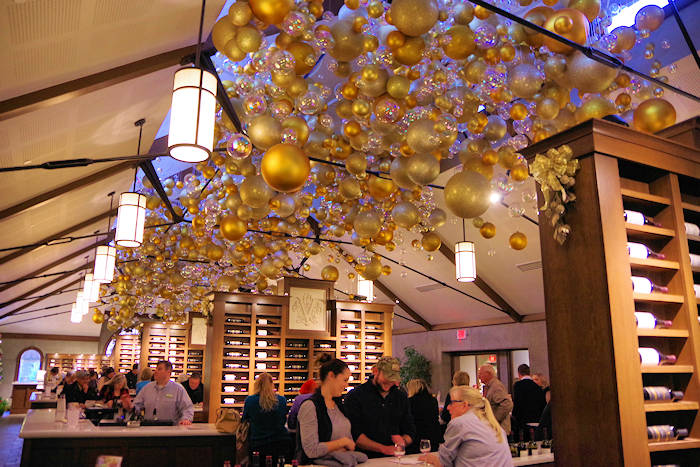 Biltmore Winery Tours & Wine Tasting
During your Biltmore visit, don't miss the winery! Access to the winery is included in your admission ticket, and you drive by it on your way out of the estate. Reservations are now required on the... read more 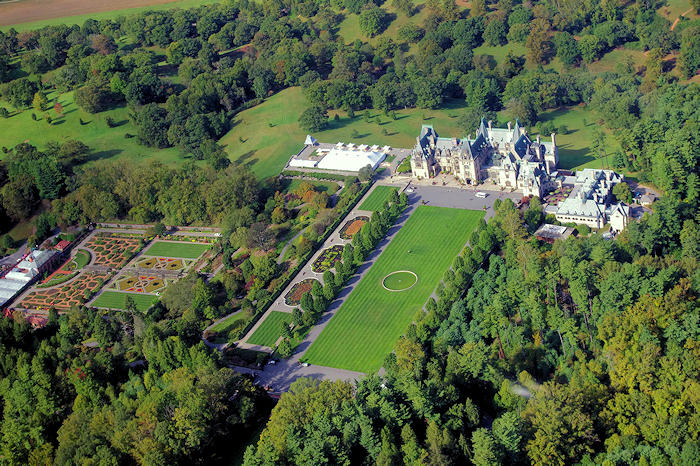 Grand Gardens of Biltmore House
Stroll 30+ acres of formal and informal gardens adjacent to the Biltmore House, all designed by America's foremost landscape architect, Frederick Law Olmsted. After your house tour, stroll through a... read more 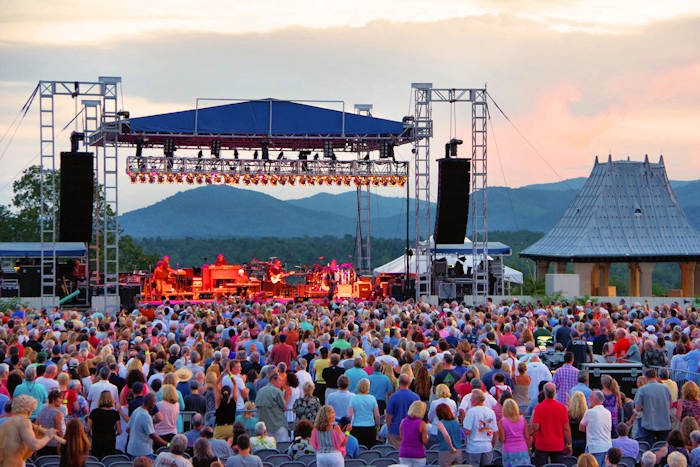 Biltmore Summer Outdoor Concerts
There will be no concert series in 2022. Biltmore House and the Blue Ridge Mountains serve as the backdrop for amazing musical experiences during the annual Biltmore Concert Series each summer. The... read more 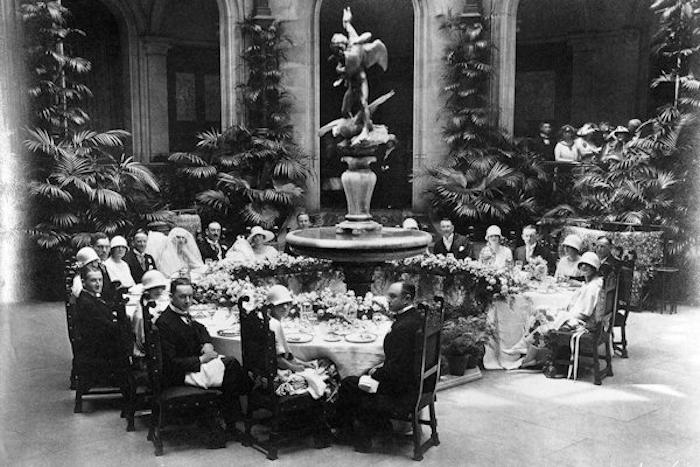 Biltmore Estate & George Vanderbilt History
The Vision
In the late 1880s, George W. Vanderbilt, then a young man of 25, came upon the perfect spot in North Carolina's Blue Ridge Mountains for a 250-room French Renaissance chateau to be... read more 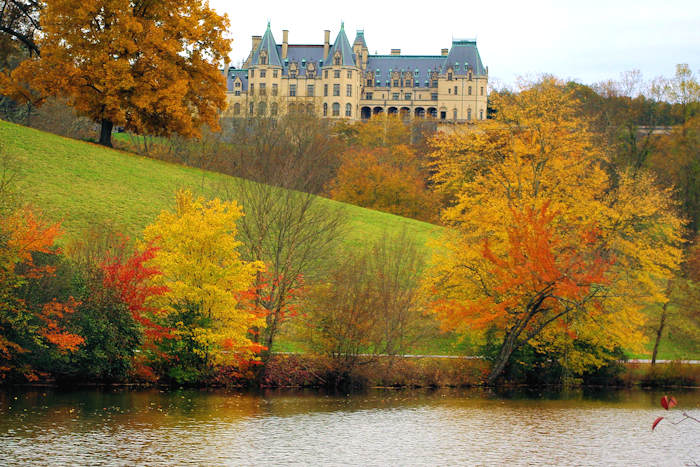 Fall at Biltmore
In addition to fall color, you'll find many extra events and things to do at Biltmore in September and October. Explore the estate that is... read more