We love the many historic courthouses in the towns of western North Carolina near Asheville. While many are still in use, others have been repurposed into a variety of uses for the community. These seats of government remain an important focal point for pride and celebrations in each community. Go see them!

Jackson County (Pic Above): Perhaps the most photographed courthouse in North Carolina is Jackson County's 1914 jewel that sits atop a hill overlooking Sylva's Main Street and the Blue Ridge Mountains. Today, it's home to the Jackson County Library, and visitors are welcome to explore inside. Climb the 107 steps from Main Street or park on the hilltop. Address: 310 Keener Street, Sylva. Read more about Sylva. 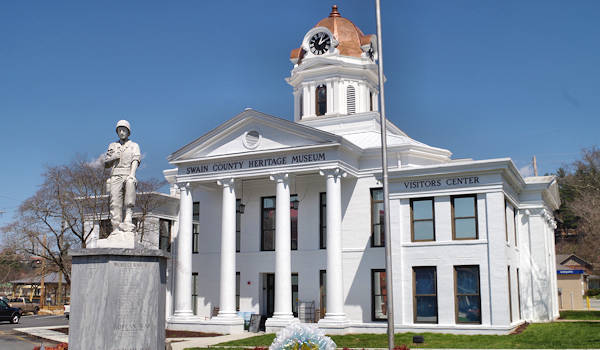 Swain County: The stately 1908 Neo-Classical Revival Courthouse in downtown Bryson City has been restored and transformed into a fantastic resource for tourists and locals. On the first floor, find an official visitor center for the Great Smoky Mountains National Park, local information and a wonderful store and bookshop operated by the Great Smoky Mountains Association. Open 9-6 every day. On the second floor, browse the interesting exhibits of the Swain County Heritage Museum that tell the mountain life of early settlers. On the front lawn, see the marble war memorial. 12 Everett Street, Bryson City. Read more about Bryson City. 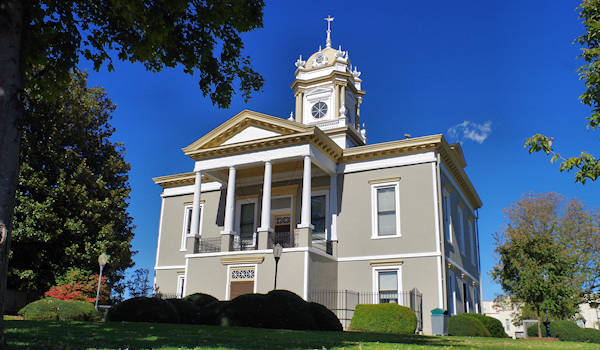 Burke County: This beautiful 1837 Classical Revival Courthouse is the centerpiece of Courthouse Square park in downtown Morganton. It's home to many events and festivals throughout the year. The building has plenty of interesting history. In the mid 1800s, the NC Supreme Court held its annual August session here. During the Civil War in 1865, Major General George Stoneman occupied the building and destroyed most of the county’s records. A new courthouse was built in 1976. The original courthouse was restored and now has exhibits by the Historic Burk Foundation. It's open Tuesday-Friday, 10 AM-4 PM (closed for lunch) and by appointment. Outside, see a monument to Confederate Army troops, a memorial rose garden and statue of Senator Sam Ervin, Jr. 102 East Union Street, Morganton. Read more about Morganton. 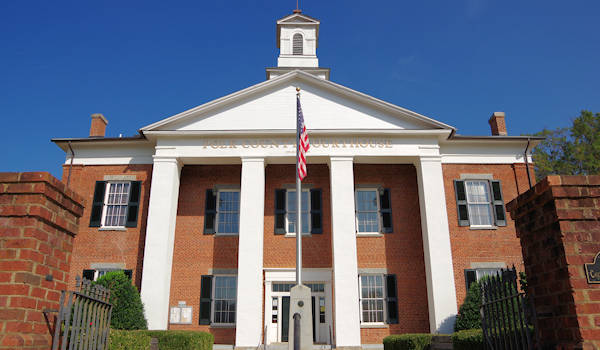 Polk County: This courthouse, finished in 1857, is one of the oldest still in use in North Carolina. The Greek Revival building been beautiful restored, so go inside! On each side are parks that host many festivals and events. Out front, the Doughboy statue honors the men who fought and died in WW I. 35 Walker Street, Columbus. Read more about Columbus. 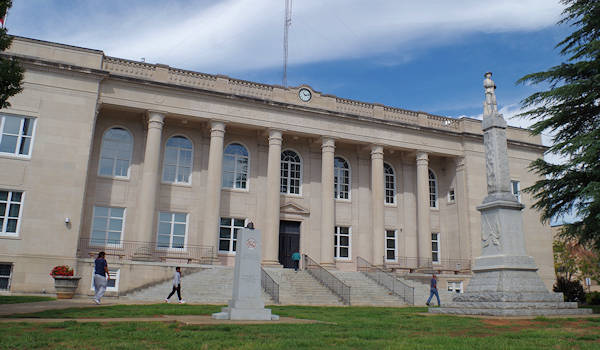 Rutherford County: This active courthouse was designed by noted architect Louis H. Asbury. The Renaissance Revival style building was built in 1926. During the Christmas season, the 75-foot tree on the front lawn shines with lights. 229 North Main Street, Rutherfordton. Read more about Rutherfordton. 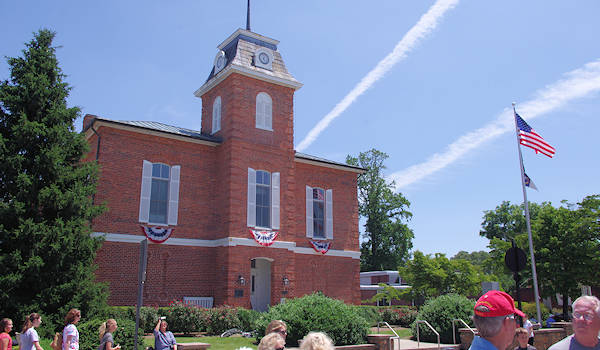 Transylvania County: Overlooking Brevard's town square is this 1873 Italianate-style active courthouse. On the front lawn is a gazebo bandstand used during many festivals and events. For local history, visit the nearby Transylvania Heritage Museum. 7 East Main Street, Brevard. Read more about Brevard. 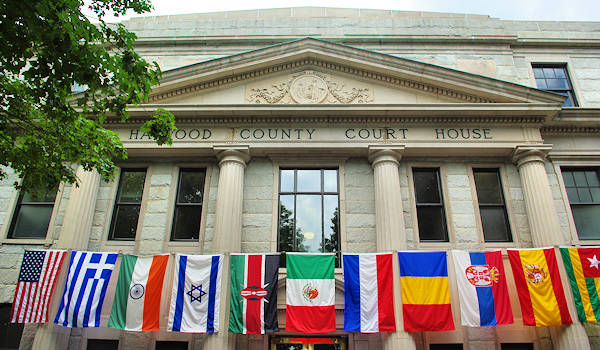 Haywood County: The 1932 Classical Revival style building is home to a variety of county offices, with a newer courthouse down the street. Enjoy many fun events out front, including Mountain Street Dances each summer and the Folkmoot International Festival. 215 North Main Street, Waynesville. Read more about Waynesville. 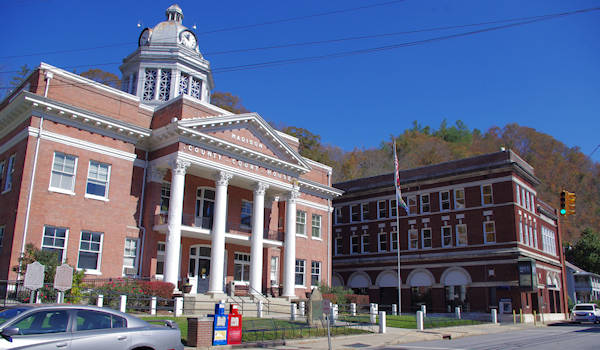 Madison County: This stately Courthouse by the French Broad River was built in 1907 and designed by Richard Sharp Smith, head architect for the Biltmore House. The Neo-Classical Revival brick structure sits in the heart of Marshall, with historical markers on the lawn telling the story of the town’s history. 2 N Main St, Marshall. Read more about Marshall. 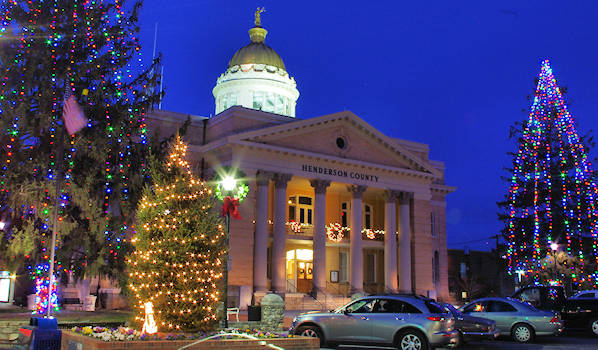 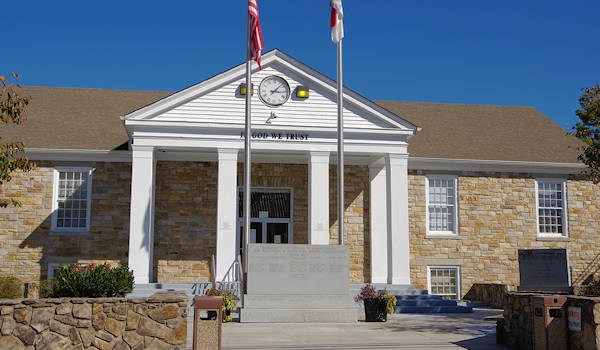 Graham County: One of the "newest" historic places on our list, this 1942 Classical Revival style building as one of three North Carolina courthouses built with funds from the Depression-era Works Progress Administration. It is made with local stone. In 1994, the courthouse was used as a film location for the movie Nell which starred Jodie Foster and Liam Neeson. On an outdoors sign adjacent to the courthouse, read about Robbinsville being the site of the last surrender of the Civil War east of the Mississippi. 12 Court Street, Robbinsville. Read more about Robbinsville. 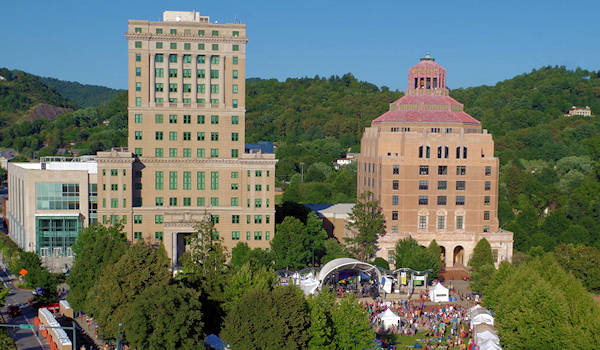 Buncombe County: Asheville's County Building & Courthouse (left), completed in 1928, is one of the most impressive in North Carolina and overlooks Pack Square Park. The 17-story, Neo-Classical Revival style building has a lobby with a sweeping marble staircase, bronze and glass screens, ornate plasterwork and mosaic tile floor. So it's definitely worth a peek inside. 60 Court Plaza. Next door is Asheville's City Hall, a colorful Art Deco masterpiece also completed in 1928. Take a peek inside there to see an exhibit on the USS Asheville military ships! Read more about Downtown Asheville. 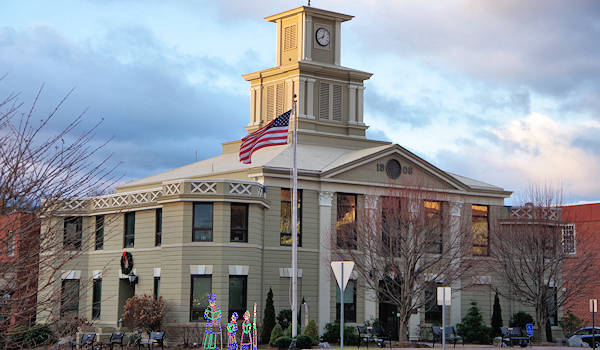 Yancey County: Located by the beautiful 1834 Town Square park in Burnsville, this Classical Revival style stucco building was built in 1905. In 1965, a new courthouse was built. A local judge bought the building, but it was vacant for the next decade and fell into disrepair. The city purchased the building in 1974 and renovated it gradually for many years to become their beautiful City Hall today. 2 Town Square, Burnsville. Read more about Burnsville. 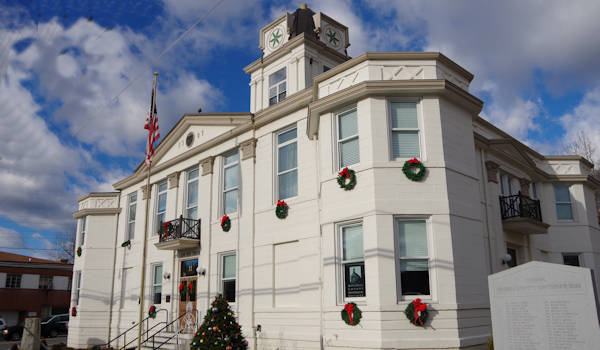 Mitchell County: Built in 1907, this Classical Revival style building is now home to some county offices and the Mitchell County Historical Society. Take a museum tour on Wednesday through Saturday from 10 AM-4 PM. 11 North Mitchell Avenue, Bakersville. 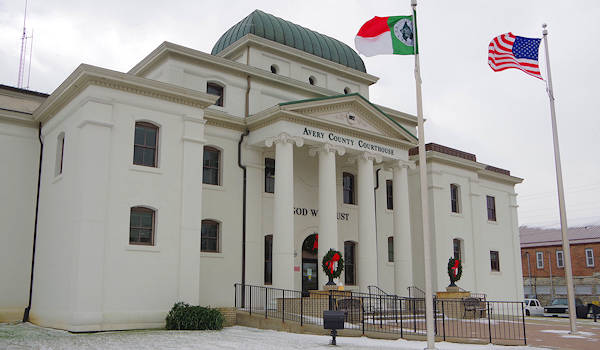 Avery County: Overlooking Avery Square in Newland (near Banner Elk), the 1912 Courthouse is the highest east of the Mississippi with an elevation of 3,600 feet. Also, Avery County is the youngest of North Carolina's 100 counties, founded in 1911. The square includes monuments to fallen peace officers, fallen firefighters and a large veteran's memorial added in 2016. 200 Montezuma St, Newland. Read more about the Banner Elk area.