After 30+ forest wildfires burned more than 70,000 acres of forests in the North Carolina mountains during October and November 2016, we are so delighted that most of the trees and wildlife survived! Plus, only one home was lost in North Carolina. Most of the fires burned in the Nantahala National Forest. Other large fires nearest Asheville included Party Rock (Lake Lure) and Chestnut Knob (South Mountains State Park). After two months with no rain and a year-long drought, soaking rains arrived the last week of November and first week of December to help prevent more fires.

We are so grateful for the 1,000+ firefighters and forest fire experts that come to our aid from across the United States and Canada. Photo at very top of this page is the Alaska R-10 Interagency Type 2IA Crew atop Chimney Rock after the Party Rock fire was contained (and Chimney Rock Village and all homes and businesses at Lake Lure were saved). Fortunately, the fires burned mostly ground debris including newly fallen leaves. So views are still as spectacular as ever.

On November 28th, a fire burning high in the Great Smoky Mountains (atop Chimney Tops) spread quickly into the town of Gatlinburg, Tennessee, due to a perfect storm of extremely high winds flowing directly toward the valley that had not seen rain in months - with plenty of dried leaves on the ground. Unfortunately, there were 14 fatalities, 191 injuries and 2,460 structures were damaged or destroyed. Fires are now mostly out and the town plans to reopen soon. No fires were reported on the North Carolina side of the Great Smoky Mountains National Park. Newfound Gap Road through the park reopens on December 9, 2016. 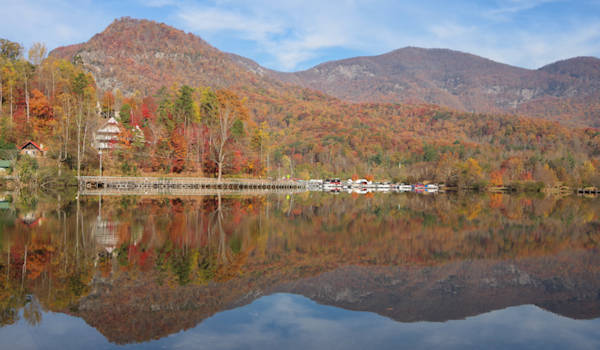 Nov 22nd at Lake Lure: It's almost impossible to believe that this hillside was on fire last week. Since mostly leaves burned, most of the trees are fine.

According to Clint Calhoun, Environmental Management Officer for the Town of Lake Lure: "Fire, while often viewed as tragedy from a human perspective, is a necessary and important dynamic in southeastern forests. This fire, while extremely large, was neither catastrophic nor devastating for our forests, but rather quite beneficial from the standpoint of litter and debris removal and carbon replacement. In the spring, the forest canopy will be renewed with green leaves while the forest floor is covered with beautiful wildflowers, leaving little evidence that a major fire event ever occurred."

All state parks that had closed have reopened except for South Mountains. Many trails in Nantahala National Forest remain closed, including parts of the Appalachian Trail and the Upper Whitewater Falls trail. 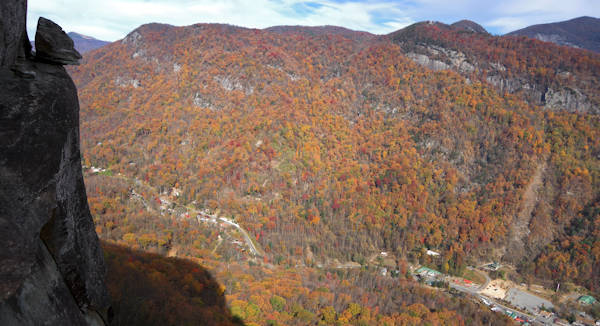 The hillside that was on fire last week looks untouched today (November 22, 2016) - looking from Devil's Head at Chimney Rock down into the village.

FUNDRAISER: Thank you! Our GoFundMe campaign was a huge success, reaching our goal of $5,000 in just two days (your donations of $3055 with our match of $2500). On Nov 18th, we mailed a check for $5,555 to the Chimney Rock Volunteer Fire Department for much needed equipment and supplies. Their fire station barely escaped the fire. Since they are a volunteer group, their resources are limited. They hope to buy an ATV to help fight forest fires (if you want to donate more!). 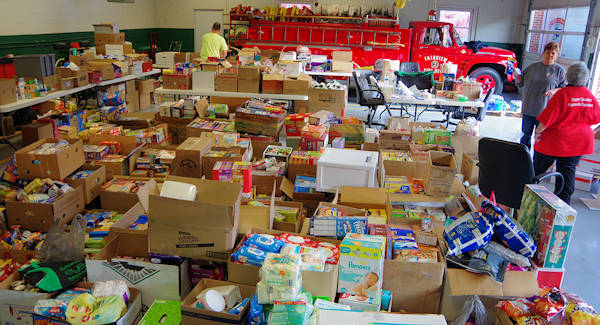 Amazing pile of donations on Nov 15th at Fairview Fire Dept to help firefighters and evacuees. No additional supplies are needed.

Donate to Forest Rehabilitation Fund
In response to the wildfires, The Pisgah Conservancy has started a forest rehabilitation fund with the goal of protecting life, property, water quality, and deteriorated ecosystems from further damage after the fires are out.

Summary of Forest Fires Near Asheville

Chimney Tops Fire
The Chimney Tops 2 Fire started on November 23, 2016, burning in a remote location (Chimney Tops, a popular hiking trail) of the park in steep terrain. On Monday, November 28th, exceptional drought conditions and extreme high winds caused the wildfire to grow rapidly, causing numerous new wildfire starts from embers carried miles away and downed powerlines in Sevier County. The wildfire was determined to be human-caused and is currently under investigation.
15,653 acres, mostly extinguished 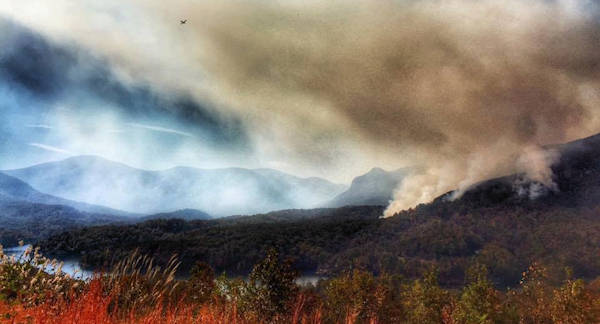 Party Rock Fire: Lake Lure / Chimney Rock
The 7,171-acre "Party Rock" forest fire is 100% contained as of November 29th! Most of the 900 firefighters have left for home or other fires. All homes and buildings have been saved. It started on November 5. 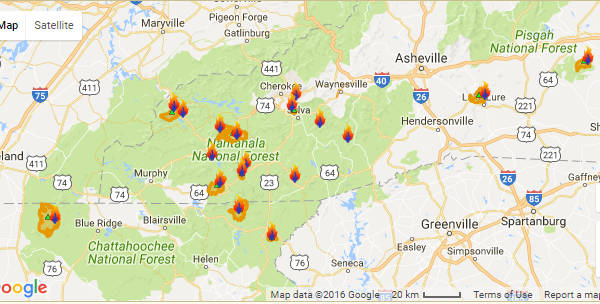 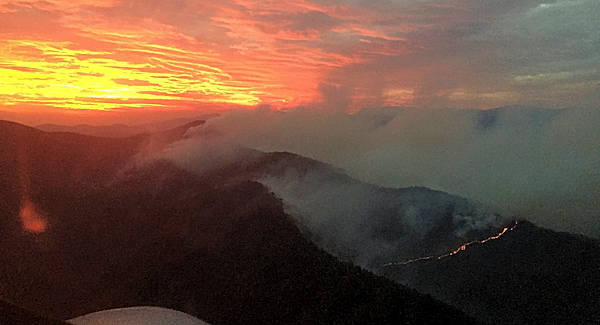 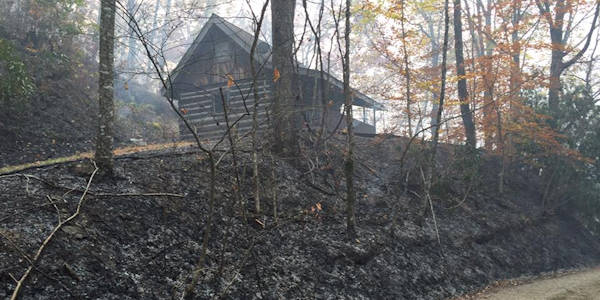 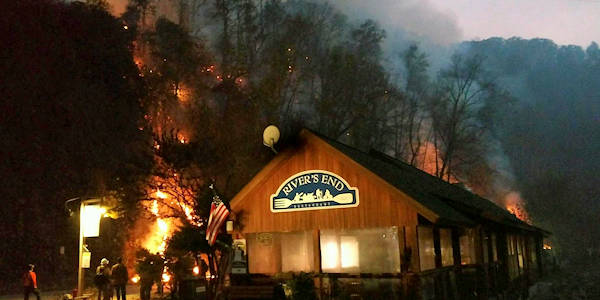 NOC has reopened after this close call. Firefighters protected their buildings.

Camp Branch Fire (USFS - Macon County)
On Wednesday, this fire that started on November 23rd made a significant run toward Wayah Bald. A private cabin was burned and is a complete loss. The Wayah Bald Lookout Tower was engulfed in flame and the wooden roof structure atop the stone tower was destroyed. Acreage 3422 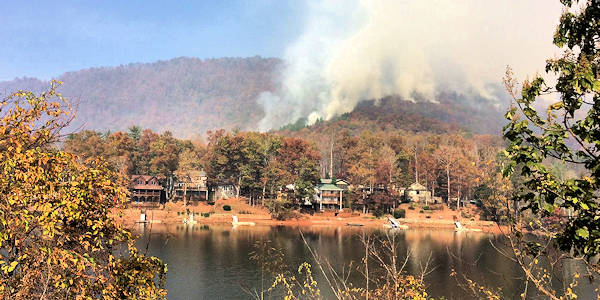 Knob (near Franklin)
Located about 8 miles west of Franklin along US Highway 64. 1,130 Acres

Whitewater (Upper Whitewater Falls)
The fire burned the stairway to the observation area. Teams will continue assessing damage to the trail system as time and conditions allow. 23 acres 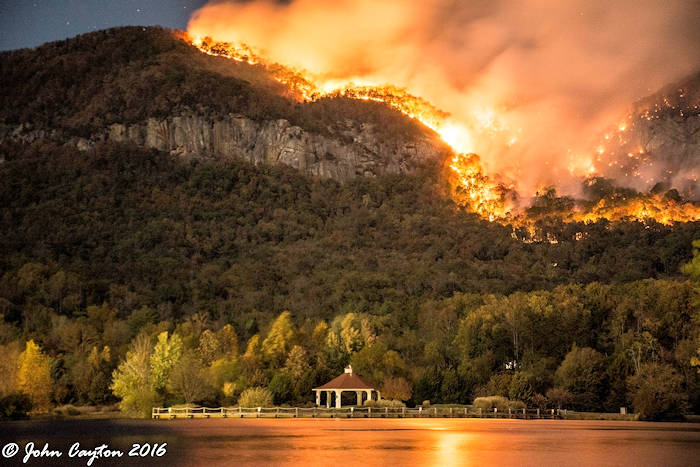 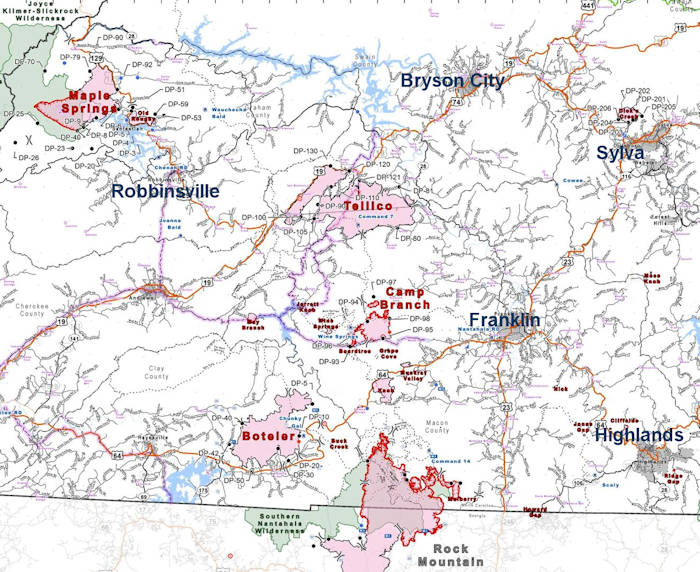 Map of wildfires in the Nantahala National Forest, west of Asheville