The Ben Long frescoes in churches and public buildings in western North Carolina are beauties to behold, and people travel from around the world to see. Visit three of them in the Asheville area (one of them 33 feet long!), each beaming with life-sized figures, often using local residents for models.

While Ben's studio and teaching center is in Asheville (not open to the public), he has spent much time in Europe studying this technique used by Michelangelo in the Sistine Chapel. After apprenticing in Italy for many years, he spent 14 years in France. After creating frescos in those countries, Ben has painted 13 frescos so far in the United States. He has exhibited worldwide and teaches many.

The term “Fresco” refers to a method of painting where the artist applies paint directly onto wet plaster, a technique in use for thousands of years. The word comes from the Italian “affresco”, meaning fresh. A fresco is painted in small portions, as the plaster dries very quickly, requiring the artist to quickly and accurately transfer the paint to the wet plaster. As the plaster dries, it produces a chemical reaction that not only binds the paint to the surface but also causes the fresco art to seemingly glow from within. 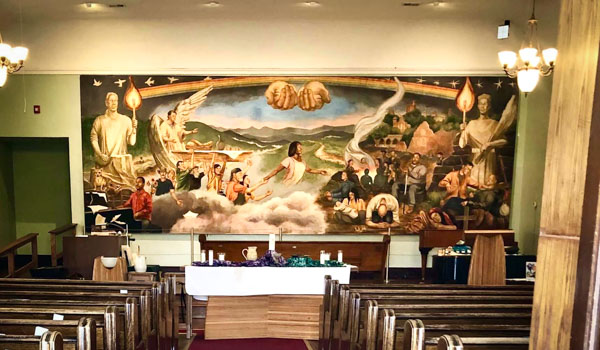 The Haywood Street Congregation, Downtown Asheville
Completed in September of 2019, this 28.5 ft x 11 ft fresco is based on Jesus’s enduring sermon, the Beatitudes, where he begins, “Blessed are the poor,” and features people who are a part of the Haywood Street Congregation’s community. Part of the ministry’s mission to “affirm sacred worth, restore human dignity, and sabotage the shame of poverty” is evident in the fresco now showcased in the sanctuary. The internationally renowned head artist, Christopher Holt, worked with a team of four creating the fresco. A student of acclaimed fresco artist Ben Long, Christopher was raised in Haywood County, and draws inspiration from the Western NC mountains.
Open Sunday, 11 AM-2 PM and Monday-Thursday, 10 AM-2 PM.
297 Haywood Street, Asheville 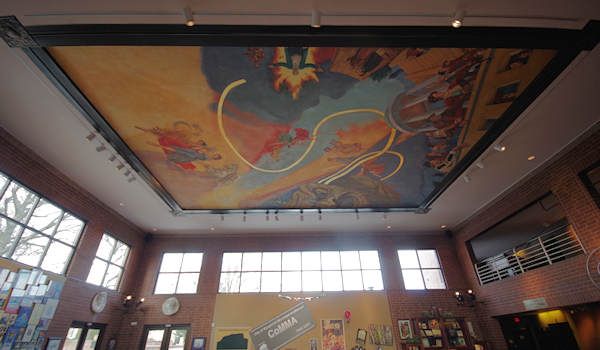 City of Morganton Municipal Auditorium
Look up! Measuring 24x33 feet on the lobby ceiling, Sacred Dance and the Muses depicts the earthly representations of the goddesses of arts and literature. Ben Long selected the nine muses because of their legendary role in inspiring all human endeavors in the arts and sciences. The Muses were of divine parentage, probably the daughters of Zeus and Mnemosyne, the goddess of memory. They were courtiers of the divinities who inhabited Mount Olympus, and they served as companions of Apollo in his aspect as the god of music. It was completed in 2004. While you are there, explore downtown Morganton (read more). Free admisson.
Open Monday-Friday, 10 AM-5 PM
401 S. College Street, Morganton 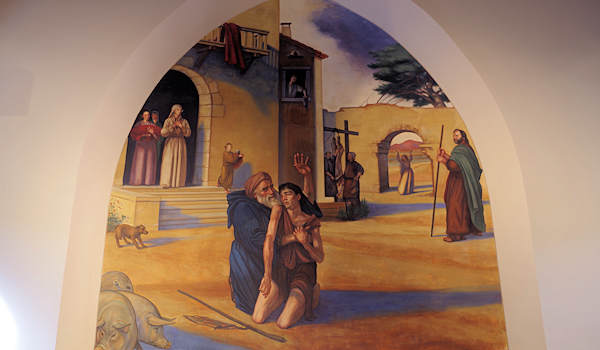 Chapel of the Prodigal, Montreat College
Marvel at the dramatic intensity and realistic detail of The Return of the Prodigal. Ben brings to life Jesus’s story about a wayward son who ran through his inheritance in riotous living, only to return home to a father’s love and forgiveness. When school is in, finding parking near the Chapel can be challenging. But a walk through the beautiful campus with a lake surrounding by mountains is an added bonus. Read more about Montreat, located near Black Mountain. Free admission, but donations appreciated.
Open Monday-Friday 9 AM-4 PM
358 Texas Road, Montreat 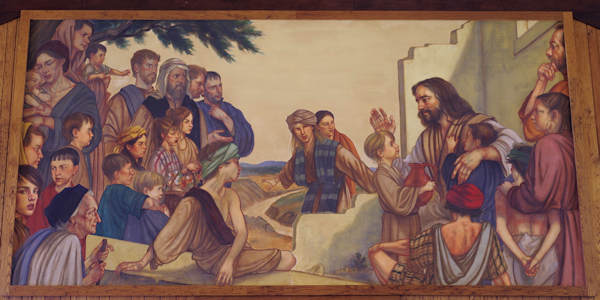 E.H. Sloop Chapel, Crossnore School
Completed in 2006, the Suffer the Little Children fresco renders the scripture of Mark 10:14, “Suffer the little children to come unto me and forbid them not: for of such is the kingdom of God.” It features children who were residents at The Crossnore School, a private, non-profit children’s home and school for 300 abused, abandoned and neglected children from across the state’s mountain and piedmont counties. It was founded in 1913. While you are on the campus, visit the Crossnore Weavers working museum and the Crossnore Fine Arts Gallery. This tiny village is located near Linville Falls and the Blue Ridge Parkway (exit US 221 at MP 317 and drive north 5 miles). Free admission, but donations appreciated.
Open daily 8:30 AM-5 PM
100 DAR Drive, Crossnore

Other frescoes in western North Carolina are found in West Jefferson, Wilkesboro and Glendale Springs. The largest secular fresco in the US is found at the Bank of America Corporate Center in Charlotte. 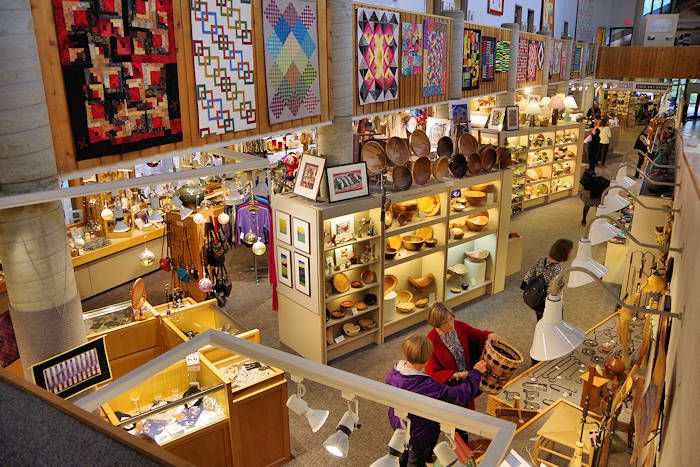 Folk Art Center
A must stop for art lovers is the Folk Art Center in Asheville, featuring the finest in traditional and contemporary craft of the Southern Appalachians. Shop the wonderful Southern Highland Craft... read more 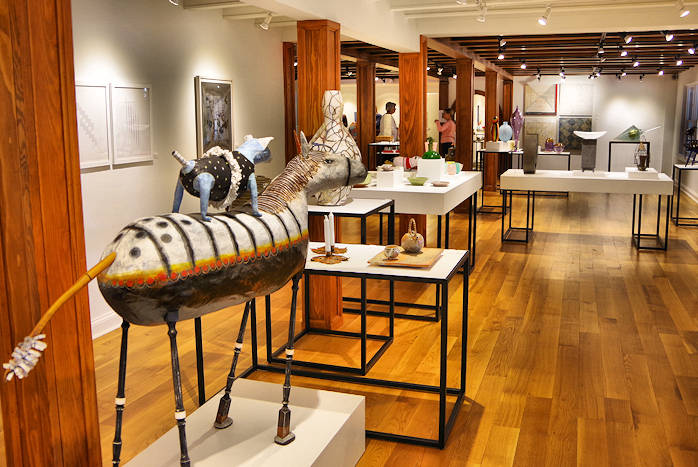 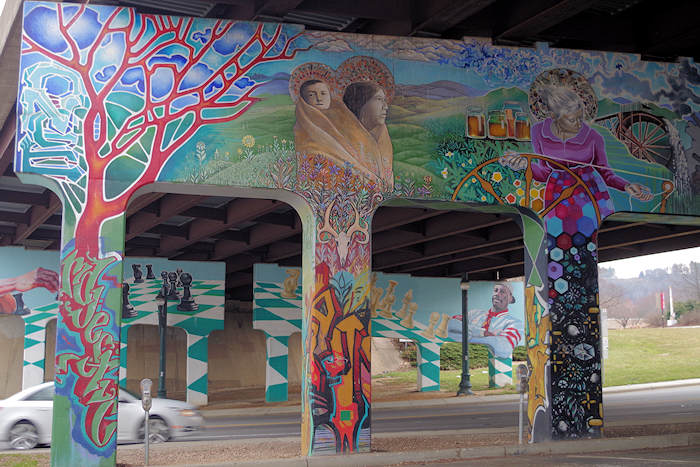 12 Amazing Asheville Murals
Find colorful murals throughout Asheville, thanks to many talented artists. And, they are free to enjoy! Murals have beautified otherwise conventional and bleak urban architecture, each having a... read more 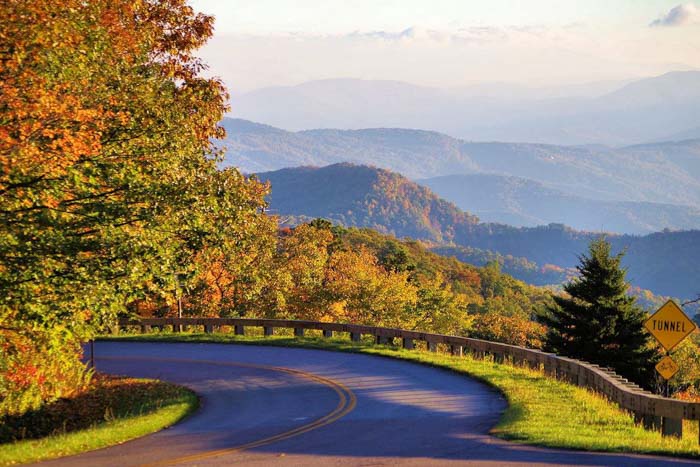 18 Scenic Mountain Drives Near Asheville
Take a scenic drive in the mountains surrounding Asheville. Go over the rivers, through the woods and by waterfalls, with plenty of things to do along the way in the national parks and forests.... read more 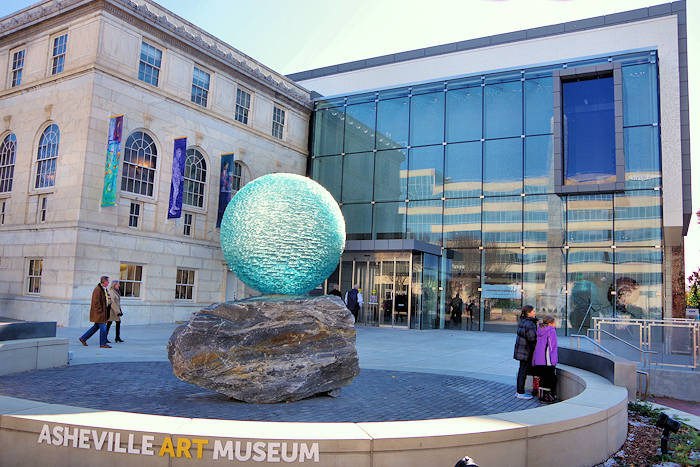