How Dupont State Forest was Saved
Skip to main content

DuPont State Forest: How It Was Saved

The area around Triple Falls and High Falls in DuPont State Forest almost became an exclusive real estate development. Here is the fascinating recent history of the 10,300 acre DuPont State Forest was acquired and preserved, in three major phases, spanning from 1995 to 2000.

The 7600 acre forest was purchased by the State of North Carolina in 1996 and 1997 after DuPont sold its industrial operation and surrounding land holdings. The 2700 acres surrounding the industrial facility was sold to Sterling Diagnostic Imaging in 1996. The Conservation Fund, a national non-profit organization, negotiated an agreement between DuPont and North Carolina officials which facilitated the public purchase. DuPont transferred all excess property to the Conservation Fund under favorable terms (a combination of land donation and land sale). The State later purchased most of these lands from the Conservation Fund for approximately $2.2 million. Local environmental groups were instrumental in bringing these three parties together in 1995. Funding for the State Forest was granted by the North Carolina Natural Heritage Trust Fund; about 1750 acres of the property is registered as having special ecological significance (with the N.C. Natural Heritage Program), and receive special management protection.

Approximately 500 acres were added to the Forest along Reasonover Road (south end) in early 2000. This tract, which DuPont also originally sold to the Conservation Fund, was purchased with funds from the Natural Heritage Trust Fund.

The 2200 acre tract in the middle of the original State Forest, containing High Falls, Triple Falls, and Bridal Veil Falls was acquired by the State on October 23, 2000, after the North Carolina Council of State, led by Governor Jim Hunt, voted to invoke its power of eminent domain. The action was taken against a real estate developer who was building a large residential housing development in the center of the State Forest. See detailed history of the waterfall property below.

Big Fight for the Waterfalls
Triple Falls, High Falls, and Bridal Veil Falls, which were not part of the original State Forest, were protected from residential development only after a controversial, two year struggle.

Sterling Diagnostic Imaging put the 2200 acre waterfall tract up for sale during the winter of 1999. The Conservation Fund again represented the State of North Carolina in an effort to bid for the property through a private sale process. Sterling rebuffed all public pleas to work out an agreement with the State, and insisted on a private, secretive bidding process. By July, Sterling announced that the property was awarded to developer Jim Anthony of the Cliffs Communities for $6.35 million. The Conservation Fund announced it had bid $5.5 million.

Despite numerous appeals from the public, Governor's Jim Hunt and George Bush, Sterling leaders did not allow the State to match the winning bid. Numerous questions and allegations were raised in the local press and in the local community suggesting collusion between the developer and the shell company created by Sterling's Houston-based investors months before the property was put on the market. These allegations are still unproven - indeed, the private land sale produced no public records whatsoever to substantiate the unusual bidding process.

Just after the sale, the developer initially stated in the Hendersonville Times News that he had no plans to develop the property, but planned to keep it as a private retreat. In fact, Sterling's land deed filed at the Transylvania Courthouse flatly stated that the property could not be used for residential purposes. Over the ensuing months, however, it became apparent that Anthony was planning a massive upscale gated residential development in the center of the State Forest, using the waterfalls as the central attraction. Only later did the public learn that the complex legal agreement between Sterling and Anthony was unenforceable, leaving Anthony free to backtrack on his promises.

In retrospect, it appears that the vague land use restrictions served to suppress the appraised value, and consequently the Conservation Fund's bid for the property (on behalf of the State).

During the fall of 1999, then Sierra Club president Chuck McGrady and local attorney Sam Neill met with Cliffs Communities officials to see if there was any way to secure protection and public access for High Falls and Triple Falls. Though more assurances were received from the developer, the coming weeks proved these assurances false. The developer filed plans with Transylvania County to build a massive real estate development on the property, and quickly began construction of the High Falls bridge and a large road system.

Neill and McGrady began an effort to raise awareness in Raleigh of the impending real estate development and its impact on the waterfalls and the Forest. The realistic objective of this was to pressure the developer into making real concessions concerning protection of the natural resources and public access to the waterfalls. What sprung from this effort, the condemnation of the entire waterfalls tract, was almost more than either man had hoped for.

In the winter of 2000, Attorney General Mike Easley suggested that the waterfalls in the center of the Forest be protected from development with guaranteed public access. He threatened that, if necessary, the State should use its power of eminent domain to acquire the waterfalls. On April 4th, Governor Hunt and the Council of State surprised many by declaring that the entire 2200 acre tract should be condemned if suitable protections and public access could not be negotiated with Anthony.

Friends of the Falls, a grassroot group of Forest users and waterfall lovers, formed several days later and rallied a large wave of public support to protect the property from development. Many thousands of letters, faxes, phone calls, and emails were sent to Governor Hunt and the Council of State urging bold action to protect the crucial "Heart of the Forest", easily outnumbering opposing contacts.

Property Rights advocates, including virtually all local Republican leaders, objected loudly to the Governor's proposals. After six months of negotiations, the State's attorneys were still unable to obtain enforceable public access to the waterfalls. At the governor's request, the board of directors of the Clean Water Management Trust Fund authorized funding for State acquisition of the property.

In late October, Anthony breached the negotiations by ending a voluntary building moratorium and subdividing the property - thereby daring the governor to act or back down just before the election. To the surprise of many, on October 23, 2000 Governor Hunt and the Council of State unanimously voted to invoke eminent domain on the tract. Approximately $12.5 million was paid to the developer for the initial payment (another $12 million was paid in 2003 when both parties settled before trial).

After three weeks of intense volunteer trail work, the waterfall tract opened to the public on December 17, 2000. Triple Falls thundered violently on the clear icy day as hundreds of joyful waterfall lovers made the brief journey up from Staton Road - many for the first time. The entire 2200 acres has since been integrated into the Forest, and has become one of the region's major tourist and recreational attractions.

History written by the Friends of Dupont Forest. 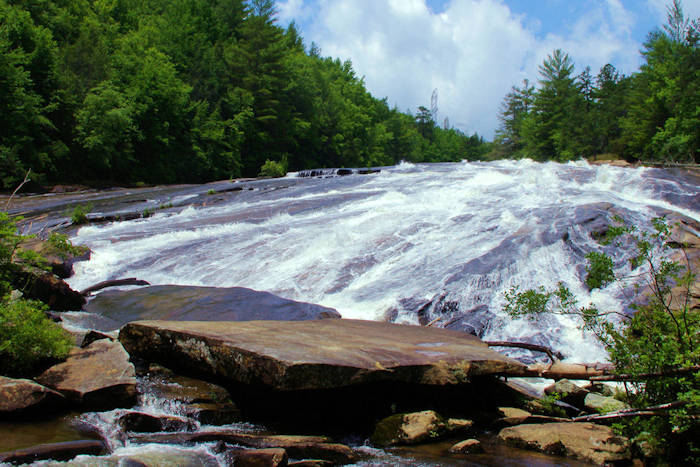 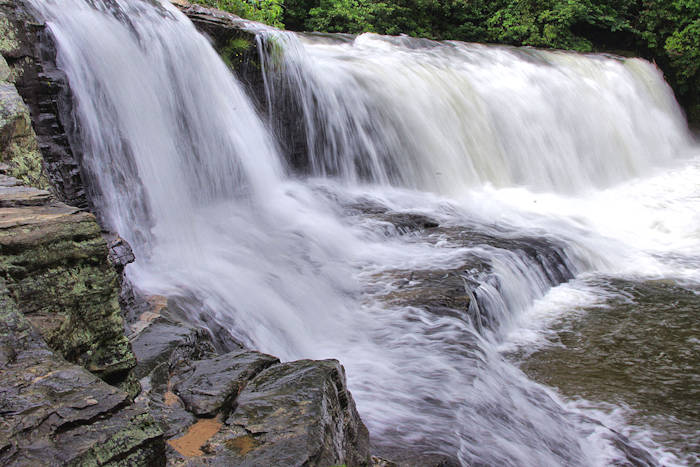 Hooker Falls, DuPont Forest
While Hooker Falls is only a 12-ft. waterfall, its wide drop into a pool creates a beautiful setting and a great spot for splashing around on hot summer days. This is the fourth waterfall on the... read more