Returning in 2022!
The tiny town of Saluda (700 residents) welcomes 10,000+ visitors for Coon Dog Day. The very fun, quirky street festival in Saluda celebrates the loyal pet used for many years for hunting and known for its unique bark and an amazing sense of smell. The celebration held for 50+ years includes a parade, music, street fair with art and food, and dog judging. While many street festivals discourage dogs, this one loves them! It's about 35 miles southeast of Asheville. 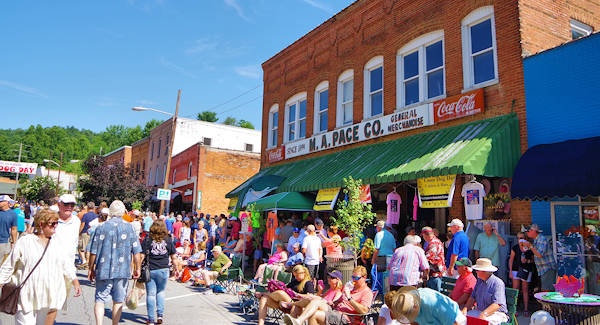 The festivities kick off early at 8 AM on Main Street with the 5K race through town. Folks bring chairs early to claim a shady spot for the 11 AM parade that features bagpipes, homemade floats, fire trucks, antique tractors, hillbilly cars, King and Queen, and plenty of coon dogs. It's the highlight of the day, lasting about 30 minutes. The day ends with the street dance that wraps up at 11 PM. Admission is free. 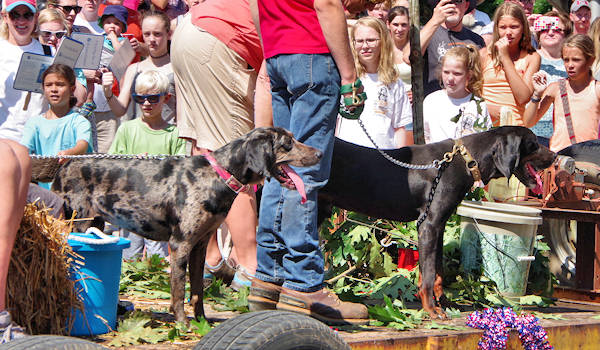 Coon dogs are the stars of the entire day. The dog judging starts at 1 PM with the Bench Show for looks and style standing still. At 3 PM is the treeing contest with dogs chasing a fake raccoon. The winner has the most number of barks in 30 seconds. Dogs are welcome to join in the fun as long as they are leashed. Get your official Coon Dog Day t-shirt at the historic Thompsons Store. 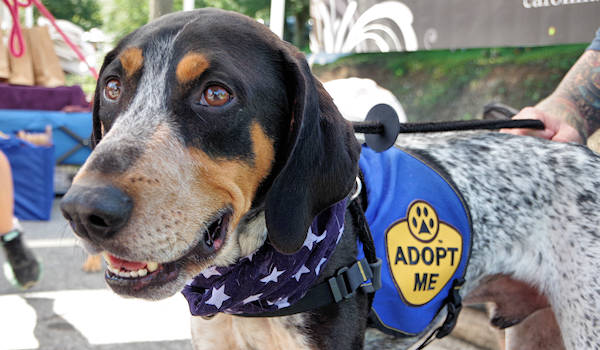 Meet many dogs up for adoption from several agencies at the festival. 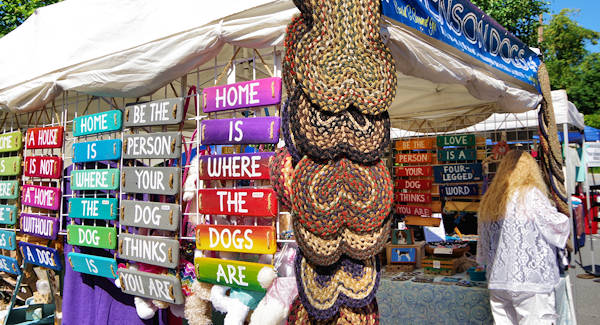 Find many goodies to buy for dogs and their owners! 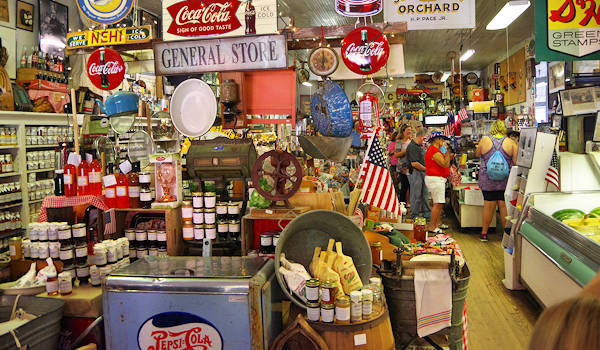 Don't forget to explore all the cool shops, general store and galleries in downtown Saluda. Parking for Coon Dog Day is scattered around downtown in many lots (look for signs), including the local school, churches and fire department. Many of these organizations use it as a fundraiser with $10 parking that includes a golf cart ride right to the festivities.

Read more about Saluda and other things to do. And see our other Top Summer Festivals.

Directions from Asheville: Take I-26 East about 35 miles to Exit 59. 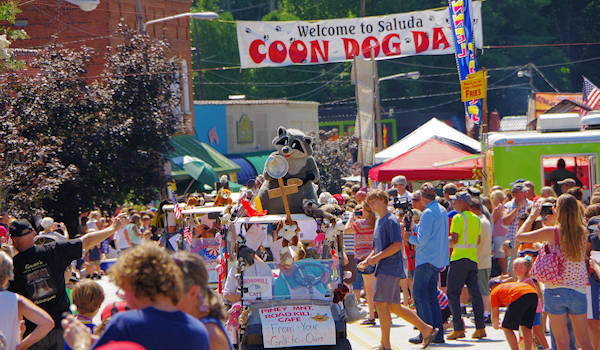 Watch Our Video of Parade Highlights

History
In 1949, the Blue Ridge Coon Dog Association was organized to replenish the local raccoon population, which had dwindled to almost nothing. By the late 1950s the club was holding a fundraising barbecue each year on the first Saturday after the 4th of July. Proceeds were used to restock the woods with ‘coons. The popularity of the barbecues, and the success of the “Old Prospector” parade that had celebrated the opening of the Rock and Mineral Museum in 1962, convinced the club to try their own annual parade beginning in 1963. Coon Dog Day was wildly successful, and the event has grown over the decades.

The Orchard Inn, Saluda
This historic inn is an elegant mountaintop retreat with peaceful views and plenty of amenities. Stay in a B&B room, suite or cottage and dine at their romantic Newman’s restaurant for a delicious farm-to-table dinner or Sunday brunch. Listed on the National Historic Register. 9 rooms, 5 cottages, $150-$315, pet-friendly,... read more
Go to their website. Save to Trip

Cabin & Cottage Rentals: Tryon, Saluda & Columbus
Find log cabin, condo or cottage vacation rentals by ponds or with mountain views in the First Peak of the Blue Ridge - many options near the Tryon International Equestrian Center.
Go to their website. Save to Trip

B&Bs & Inns: Tryon, Saluda & Columbus
Find a great vareity of historic B&Bs and inns in the towns of Tryon, Saluda and Columbus, the First Peak of the Blue Ridge. Includes award-winning Pine Crest Inn and Orchard Inn with exquisite dining.
Go to their website. Save to Trip
Want to list your business on this page?Contact us
My Trip Planner
Also See
Check this out! 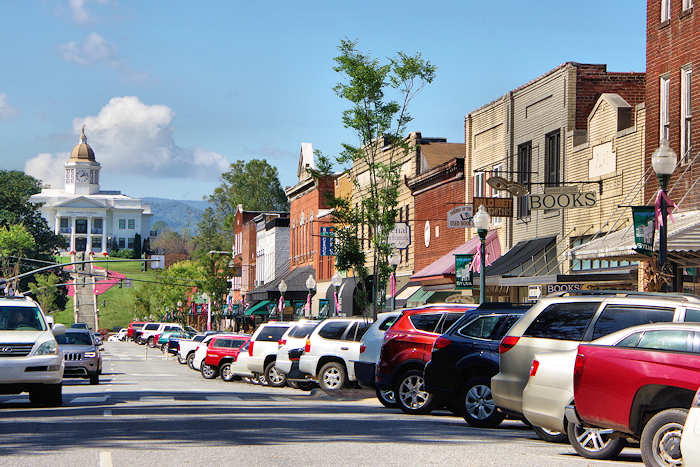 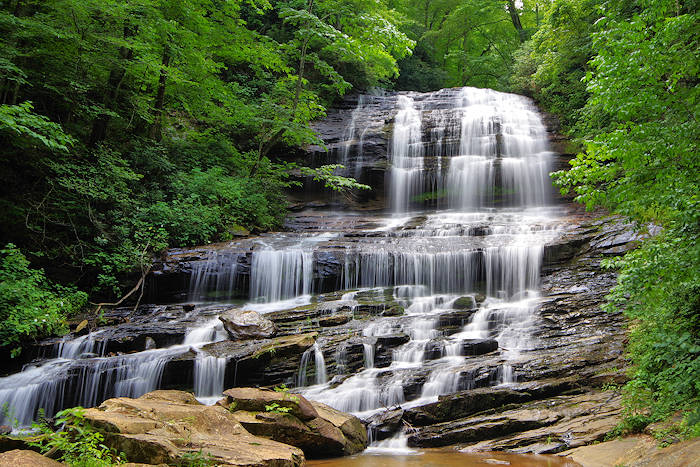 Pearson's Falls, NC
Pearson's Falls is a gorgeous 90-ft. tall waterfall that cascades down a staircase of rock. It is accessed via an easy 1/4-mile hiking trail that follows the brook, with several picnic tables along... read more 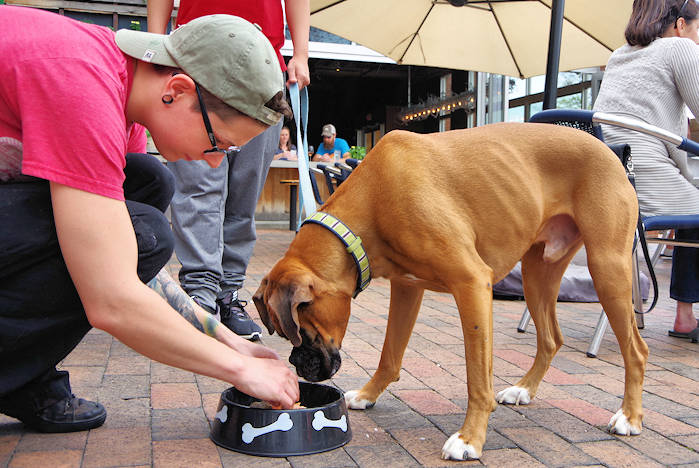 Asheville: Dog City USA
Asheville is vying for yet another title, Dog City USA. We are lucky to have so many hotels, restaurants and breweries that love dogs - a long history of being very... read more